This morning we woke up at 7:00am. No one set the alarm for earlier. We were all exhausted from the previous day! For breakfast we had eggs, sausages and tater tots, along with some items that were there yesterday – cereal, bagels, cream cheese and peanut butter. Everyone made their lunches, then went outside to do devos around 8:15.

Devos ended at 8:50 and we did something the Youth Works staff called ‘circle up.’ Basically, everyone stood in a circle and then sang “Father Abraham,” along with doing the motions. I am assuming there is going to be a different song or activity every day. After circle up, we all left for our works sites, my group again being at the Christian school. We will be there all week. We ended up arriving earlier than we did yesterday, so we sat outside for a while before the owner of the school showed up. 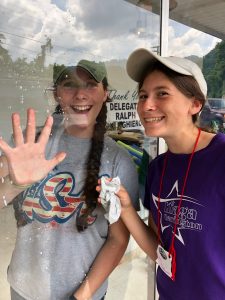 Only half the floor was painted yesterday, because they needed to move all the furniture to one side of the room. After moving it all to the other side and opening all the doors (the paint smells really bad), we started painting. Pastor Josh showed us the proper way to use a roller, and we got to work. The other girl who was painting with me used a regular paintbrush and painted the trim and around everything we had taped. There were a couple of times when we got paint on the wall, but we caught it quick enough and were able to wipe it off. We were using oil-based paint for the floor instead of latex-based, so it won’t come off as easily and we had to be really careful.

Also, if we got it on our shoes, we couldn’t track it around the building, so we had to attempt to wipe it off. The tables we moved to the other side of the room kept scratching the floor and my shoe got stuck in the already dry paint and created a footprint – oops!

In the white room, they painted the ceiling it was a drop ceiling, so they just painted the grids to keep them looking nice. Unfortunately, while painting the wall, they realized after a little bit that the white they were using was not the same as the rest of the room, so the owner of the school had to go buy more paint. They were able to fix it.

Those who were weeding were mainly just finishing what we started yesterday and trimming some of the really big bushes – we brought hedge clippers this time so we were able to. We also brought a weed wacker, but unfortunately, it was missing the cap that keeps the weed whacking part in place, so we couldn’t use it. The building is starting to look great! My sister, Elie, and I also helped some of the people who work at the school empty sandboxes.

Another group of pretty much all boys (there is one girl) joined us. They had been working in a room that was just drywalled, so they were mudding and helping sand the walls so we could paint them. It was so dusty, even though there was a tablecloth hung over the door, that you could see the dust in the hallway. The boys had to wear masks so they didn’t breath the dust in.

After lunch, we washed windows, continued weeding and painting, and moved all the furniture in the lunchroom into the gym so that we could give the newly gray floor a second coat of paint tomorrow. It was interesting, to say the least. The tables are connected two by two, so in order to move them, you have to fold them in half. There are wheels on either side. In order to get them through the door we needed four people, one on each side, and had to disconnect the tables in the middle, pull them apart very very slightly, then pull them through and quickly reconnect them. In order to not scratch the floor, there were a couple of tables they had to carry over to the door. They were heavy, but it was fun.

We got back to the host church at three-something and showered. Then we had a little bit of free time before dinner, which was pizza and salad with root beer floats for dessert. It was my group’s turn to clean up after dinner, so we did that, then everyone had more free time till about 6:00. We went downtown to join a group of local(ish) believers on a prayer walk. I was a little nervous about it because I didn’t really know what it would consist of, but it was actually really cool. We all stood in a large circle and prayed, then we walked down to the courthouse stopping to pray once, and we all held hands in a circle around the courthouse, and prayed. Afterwards, a bunch of us sang hymns and other worship music as we walked back to the original meeting place. It was really cool. After hanging out a bit, the group that had come with Youth Works went back to the host church for our worship service. We shared ‘Wildcat Wowzas’ (things people did that others thought were very neat or selfless), talked about the devotion this morning, which was about the prodigal son, watched a short video pertaining to it, and sang some worship songs.

After that, we gathered by church to discuss what we learned today, then since there are 45 people in the Orchard group, we split into smaller groups to have further discussion.